A rear–view video camera has long and deservedly been popular among motorists. But here we will look at an interesting and very new variety. This is a wifi car rear view camera.

Why do you need?

The advantages over conventional parking sensors are obvious. In addition, the video camera may NOT be a replacement, but an addition to the parking sensor. But what if the navigator has a video input and there is nowhere to connect a regular camera? This is where wireless technology comes in.

Using a Wi-Fi camcorder has the following advantages:

Let us consider the latter in more detail. Unlike a parking sensor, a camera is a universal thing, in addition to its main purpose, it can be used as a video recording device. It is enough to install the application that will record the video stream from the device. If the car is parked where the wireless signal reaches the home or office, then the Wi-Fi video camera can be used to monitor the car and the situation in the parking lot.

The video camera comes with a Wi-Fi module, which usually starts working when the ignition is turned on, or it can be connected directly to the battery. A navigator, tablet or smartphone is connected to it, and when you switch to reverse gear, the video from the camera starts broadcasting.

What are the Wi-Fi video cameras in the car and how do they differ? According to the method of attachment and design, they are:

After choosing the most convenient and suitable design for the machine, pay attention to the following characteristics of the video camera:

It is also important that the camera is able to display the image in mirror mode. This is familiar to the driver who is used to looking in the rear-view mirrors. This mode can always be disabled. Also useful can be the function of overlaying a special marking grid on the image to accurately determine the distance to the obstacle.

For an example of installing and connecting the camera, see the following

Most often, a video camera in a car is mounted above the number. To connect, do the following:

Wi-Fi rear view camera. it is a successful modern solution that will help the driver when parking and can serve as a video recorder. It is easy to install and convenient to operate. Let’s briefly describe the cost and some models:

WI-FI modules TX-03 allow you to watch videos on any device, be it a smartphone, tablet or car head unit on Android. And without a direct connection to the gadget via a wire. To successfully sync with the camera, your gadget must have Android OS from version 2.2 or iOS from 4.3 installed. This device can also be used as a CCTV camera and video recorder.

WI-FI modules TX-03 can also be used as a video recorder. There is a function of saving video or photos to a smartphone or tablet.

Distinctive features: 1. The device uses its own Wi-Fi module for wireless transmission of video signals. 2. With the help of the client for Android and iOS, you can monitor in real time. In this way, you can monitor the situation behind the vehicle at any time. It’s very easy 3. The device must have OS Android 2.2 or newer, or IOS 4.0 or higher4. You will need to install the “WI-FI View” software application (PlayMarket or IOS)

Specifications: 1. Power supply: 12V DC 2. Power consumption: 1.5W 3 Current: 200mA 4. The time the picture appears on the device after the WI-FI module is turned on

See also  How Many Days The Video Recording Is Kept

I invite you to cooperation, direct deliveries from the factory. Sale of small and large wholesale.

How everything works is presented in the following video.

Reversing maneuvers are still difficult for yesterday’s students of driving schools. Background back. erroneous perception of the rear dimension of the vehicle. To compensate for this disadvantage, and to improve the driving technique in tight spaces, many people install parking sensors. However, the issue is often solved in the second way.

There is a solution. Wi-Fi rear view camera for the car, mounted outside the car. The kit includes a video fixing device and Wireless Fidelity dispensers. The bundle works simply:

For reference. The role of a gadget can be played by either a GPS navigator or a smartphone or tablet running on Android or iOS.

It is worth noting that the wireless camera-gadget link works exclusively in digital format. There is no conversion of a “digit” into an analog signal and vice versa, inherent in a wire link. This means that the image quality from a wireless camera is much higher than from a wired one. It is necessary to emphasize such an advantage of Wi-Fi video recording tools as versatility. After all, such a wireless module can be used as:

Technological process of installing a Wi-Fi camera on a car

The wireless video generating device cannot be used offline. it needs to be installed.

Usually the camera is installed above the license plate frame. The installation procedure is as follows:

Experts who know how to install any Wi-Fi rear view camera in a car note one feature. Do not mount Wireless Fidelity near metal. If you ignore this requirement, then the metal will “screen” the signal that generates the dispensing unit.

Having assembled the base, you should proceed to the materiel. It consists in installing software on a working gadget and configuring it. For example, for the top device GlobusGPS GL-Wi1, two programs are available: a simple RFK Wi-Fi and an advanced Sight Wi-Fi. It should be noted that they can be installed on Android OS version 2.2 and higher. Apple Gadgets are supported if the iOS version is higher than 4.2.

So, uploaded the factory software to the video receiving device, you should check the operation of the equipment, which captures the image behind the car. Experts recommend setting up automatic connection of the gadget to the signal distribution point. This is necessary so that when the reverse gear is turned on, the video viewing application opens automatically. This option is activated in the program settings.

A Wi-Fi car rear view camera is a device that transmits images using radio waves. When choosing a system, it is necessary to pay attention to characteristics that ensure reliability and ease of use. You can install the camera both independently and with the help of a specialist.

When choosing a model of a wi-fi image transmission system and a type of device, you need to pay attention to the following characteristics:

See also  How to set up NFC redmi note 8t

When choosing a complete set of a car camera with wi-fi and a type of system, it is recommended Pay attention to the Models below.

The camera is wireless and the view of the WI-FI control module displays what is happening next to the car when reversing. 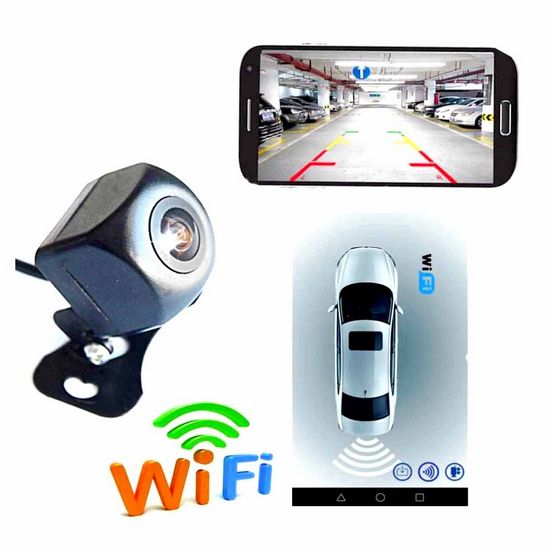 It allows you to view the image on the navigator screen.

The device is connected to a power source and the camera and navigation modes are switched. Garmin BC 30 provides quality visibility, reducing the risk of an emergency. The device allows detecting both stationary and moving objects in the path of the car.

Neoline CN10. the device facilitates the process of parking at night, with limited visibility and dirt on the car windows. It displays obstacles located behind the vehicle. This makes it possible to perform the maneuver correctly. The Neoline CN10 camera module is connected to the navigator via a wireless channel. This makes the device easier to install and use. The device has built-in parking guidelines.

A versatile device that provides a color image and has an affordable price. The device has an average degree of security. It is equipped with a CMOS sensor and built-in parking guidelines. The model is a good value for money.

The system has the following characteristics:

The installation of a camera with Wi-Fi is carried out as follows:

Do not install the wireless camcorder module near metal parts. Metal distorts the signal generated by the dispensing unit. Software installation is required to connect the device. The programs work with Android operating systems version 2.2 and higher. The camera can be connected to the IPhone. After downloading the bundled software, they check the system performance.