There are programs that allow you to hide the drive partition or the entire drive. It is not possible to access media marked as hidden in Windows. Make it publicly available only with the help of special software.

Let’s consider the example of the MiniTool Partition Wizard software to make SSD visible in the “Explorer” and third-party applications:

Windows does not support the file system

Your system still does not see the SSD? In this case, it may be that it is formatted in a special system, which Windows does not recognize (the system is used to NTFS and FAT32). Such a drive in the “disk manager” may be shown as RAW. So, let’s start to fix the situation.

Enter “Disk Management” as described above. Then right click on the needed disk and find “Delete volume” in the pull-down menu. Click on the command.

Now as you can see the drive has changed its status to “Free”.

After that you only have to re-create the volume as I described above.

All SSDs have a microcontroller which in turn is controlled by low-level firmware or firmware. If for some reason began to malfunction in the firmware, the SSD-drive will cease to function.

Malfunctioning of the firmware can be eliminated by completely clearing the data (including the information from the protected system partition) on the SSD drive, or by reinstalling it. This operation is not recommended for users who do not have appropriate skills.

Nevertheless, the process of removing data from the external hard drive and its firmware is not very complicated. For example, for Kingston SSDs the developers created a special service utility Kingston SSD Manager (https://www).kingston.com/en/su/support/technical/ssdmanager). To delete all information from the disk, including hidden system data, it is sufficient to click on the “Secure Erase” button, which is located in the “Security” tab of the main menu of the program.

From the same program you can also reset or update the firmware of microcontroller (Firmware tab).

Windows 10. How to Activate New Hard Drives and SSD’s Not Showing Up

Any other firmware utility created for SSD storage maintenance has the same functionality.

It is possible that the “Change drive letter” item is missing. This indicates a mismatch in the file system, which is why the computer does not see the SSD. To work properly the drive in Windows should be formatted NTFS.

That is, it needs to be formatted in order to make it available for full operation. This method is suitable only for those hard drives that do not contain important data, because in the process of formatting all the available information will be deleted. 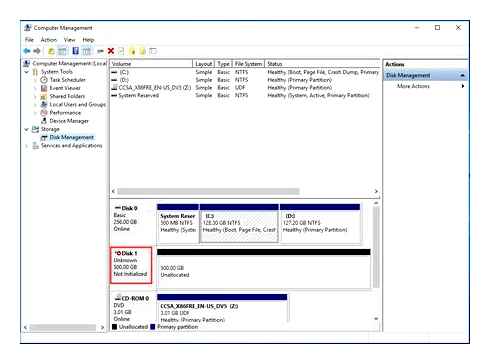 Once the drive is formatted, the problem will be corrected.

The SSD drive may not be detected by Windows 10 for the following reasons:

The malfunction may occur after connecting a new drive to a computer with a working operating system (OS), or directly when installing Windows 10.

SSD solid state drives are gradually replacing the hard disk drive (HDD). In comparison with them, this type of storage has a high write speed, good performance, and a compact size. But some users have a computer that can’t see the SSD on their Windows 10 operating system when they try to connect. Fortunately, the problem is solvable, and you first need to figure out what caused it.

Reasons why your computer won’t see the SSD

With the advent of high-speed hard drives, it seemed that data storage and transfer technology stood still. But in the mid-2000s, SSD storage devices (you can’t really call them disks, they’re simply not there) hit the market, featuring high write/read speeds without reference to the media’s position.

What to do Windows can’t see the SSD

Windows can’t see the SSD SSD has advantages over a hard drive such as high performance and reliability, low power consumption, lack of noise, and more. That’s why more and more users choose SSD as their system.

What to do if new SSD is not detected?

If you recently purchased a new SSD to replace your old hard drive and boot Windows 10 faster, you may run into an issue where the SSD is not detected on your computer.

You do not need to panic if you can no longer access your files, as you can solve the problem.