How to install and connect

Self-installation of the KIA RIO view camera is not difficult. To carry out the work, electrical tape, screwdrivers, a knife, clips and keys are required. Video camera installation can be divided into several main stages:

If there is a bolt near the device, then you should put a mass on it. Putting the original device in its original place is quite simple, but in some cases you have to change its shape and size.

What to choose for replacement

If the original Kia RIO X-Line rear view camera is expensive, you can choose another model.

Most often, they pay attention to the Chinese versions, since they are much cheaper. 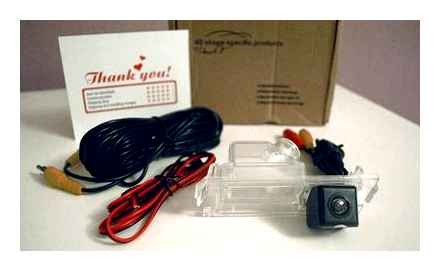 When installing the camera on a car without a corresponding option, it is necessary to provide for the need to place the display on which the image will be displayed.

Reversing in any vehicle creates a lot of difficulties. The KIA RIO rear–view camera, which is included in several configurations, can simplify the task. From time to time, there is a problem associated with the improper operation of such a device. You can dismantle and repair the device with your own hands if you have a relatively small set of tools.

Features of the original camera

The stock camera on the RIO 4 sedan and hatchback has features that make reversing easier. The rear view camera on the KIA RIO has the following qualities:

The original camera can be installed by hand on the X-Line model. At the same time, the cost of the equipment used is relatively low.

Possible malfunctions and their elimination

Some versions of the vehicle come with a built-in reversing camera. Possible malfunctions of the system that allows you to safely maneuver in reverse are in the following points:

You can fix some problems yourself. A wiring damage case has the following features:

To determine the state of the device, you need to dismantle it. At the same time, we note the following points:

If the camera is damaged, it must be completely replaced. Before buying a new one, it is recommended to clean all available contacts, since the problem is often corrosion.