The rear view camera usually mirrors the image. And there are most of these cameras. If you want to buy a camera for controlling the front hemisphere, then your choice is significantly narrowed. Under the cut, we will try to fix this annoying circumstance.

The camera comes in a cardboard box, the equipment is the most complete:
– camera
– manual
– fastening nut
– shielded video signal wire
– power wire with voltage converter
– two pieces of double-sided tape
– crown for drilling a hole

Studying the description does not add much information. the description is one for a large family of cameras and the technical characteristics of your particular camera should be marked when completing the box. But they are not marked.

Wrench nut 22. It is slightly larger than this size, so you may need to take an adjustable wrench.

The length of the thread is such that you can put on a nut and make at least one and a half turns if the thickness of the wall in which the hole is drilled is no more than 8 mm.

Inside the case is filled with a compound. It feels like loose rubber. Digging.

I managed to get to the board. It took about 15 minutes, the tool was a scalpel, a sharp screwdriver and a cotton swab with alcohol. Lucky. This camera allows you to control the image.

Contact pads are left on the board and the value of the pins is even signed. You can flip the image, you can turn on / off mirroring, you can turn on and off lines. There are also unsoldered smd components on the board that can switch pal-ntsc mode. In practice, the number of lines in the frame changes and the colors become slightly brighter or dimmer. In the same place, on the board, there is a place for connecting a 5v wire and a free area, apparently for installing a tiny converter 5.3 V.

Yes, the camera is powered by 3.3 volts. To prepare it, a 12-3.3 stepdown converter is installed on the power cord. The current in the 12V circuit is sometimes up to 120 mA, but mostly about 80. The converter heats up a little, the hand of course suffers even with long work, but still it is warm. I decided not to leave the camera on for a long time.

For experiments, I had to connect the camera to the TV-tuner built into the computer, it has a low-frequency tulip input. Immediately began to show a picture, though slightly noisy. Either power supply noise or interference inside the system unit makes itself felt. I soldered the wires to the contact pads so that I can change the camera settings without opening the case. I did not forget to bring out the ground and power wires, you need to close the control wires on them.

Then he took a neutral silicone sealant and carefully smeared the board.

When shorted by a 3.3V flip wire, the camera flips the image. The other two wires are triggered by a ground fault. This is how it looks:

You don’t need to be Euclid to guess the 90 degree horizontal viewing angle. When the aspect ratio of the frame is 4: 3 vertically, we get 67 degrees.

This is noticeably different from the stated 170. Perhaps 170 is diagonally? No, I got 107 degrees diagonally.

The camera itself is tilted from the installation plane by 50 degrees.

Thus, the field of view is a little short of the plane of the part on which the camera will be installed.

BEST WIRELESS Backup Camera!! (Trust me, I have tried a lot!)

We start the installation. I will put it on the front of the car, instead of an unnecessary logo. I already have a rear camera and a monitor, so the work will not be difficult. Estimating the installation location:

We insert the camera and screw it with a nut. We insulate the wires with heat shrinkage.

Done. Then it will be necessary to plug the holes of the logo.

From the bottom edge of the frame to the license plate about 8-10 cm, so as soon as someone else’s bumper reaches the bottom, hit the brake.

The camera works, the price is low, the picture is good, there is no noise when installed on the car. Current consumption is about 80mA. The tightness was complete (I hope it will remain so after my intervention). It is relatively easy to adapt this camera to your needs, if you have specific ones. The manufacturer has incorporated the ability to configure The disadvantages include a smaller viewing angle than stated and a small (really small) heating of the power supply.

The camera will help you in a tight parking lot, it will allow you to see a scooter thrown in front of the bumper, or an installed concrete hemisphere. In winter, it is easy to clear it of ice and slowly steer around the yard, looking at it, while the main glass thaws.

The parktronic kit includes a set of sensors, a control unit and fittings that provide the ability to attach and communicate between components. The principle of operation consists in ultrasonic determination of the distance to the nearest object by sensors. For example, during parking, the driver can monitor the situation through the display, which reflects information on the data of the rear or front sensors. Depending on the model, the parking sensors on the car can provide information in audio format. This alert option allows you not to be distracted by the display and to respond to radar signals in time. Installing such a kit involves physically mounting sensors in the front or rear bumpers. The number and configuration of the location of sensors is chosen by the driver depending on his preferences and driving skills.

What is a rear view camera?

By its principle of operation, such a system is simpler and clearer. In fact, it provides video transmission from the problem area to the display. That is, in the same rear space under the bumper or directly in it, a small camera is attached, which, like a video recorder, captures what is happening in front of the car. As for the display, it can be represented by a full-fledged compact monitor on the control panel, and a miniature screen in the rear-view mirror design. It turns out to be a fairly simple, but also effective configuration, which requires no more effort in installation than a parking sensor. At the same time, the rear-view parking camera can be integrated into the standard multimedia system. In this case, you can eliminate the need for a separate display, since the video will be broadcast through a radio tape recorder with a screen. 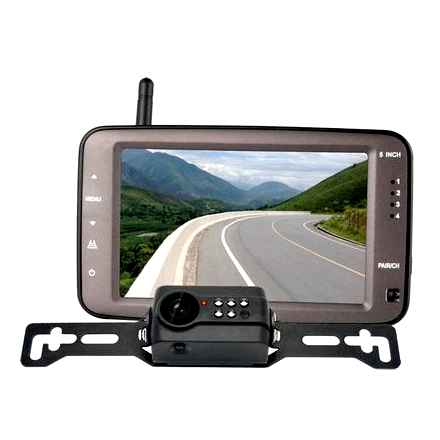 The negative factors of using a parking radar include false alarms and malfunctions in unfavorable climatic conditions. But if the manufacturers practically got rid of the second drawback in the latest versions, the percentage of errors still remains high. Therefore, the question of which is better. parking sensors or a rear-view camera, due to false alerts from the radar system, may suggest an answer in favor of the second option.

A set with parking sensors will cost more. over, its cost will depend not only on the company and technical characteristics, but also on the number of sensor elements. A standard set for 4 sensors is represented by standard rear parking sensors, the price of which can be 10-15 thousand rubles.

The affordability of video cameras depends to a greater extent on technical indicators, including resolution, shooting formats, etc. But the cost of such a device in decent quality versions is about the same 10 thousand rubles. Another thing is that rear parking sensors, the price of which varies between 12-15 thousand rubles, usually include a display in the kit. In the case of a rear-view camera, this component can be supplied separately, and its inclusion will increase the price tag by at least a couple of thousand.

The main advantage of the parking radar is its sensitivity and reliability. Even if Honor has that its signals can be false in a high percentage, this practically does not affect the level of security. Therefore, as an insurer against collisions, this device can be useful especially for beginners. In turn, the video camera has a big plus as a simple and effective means of transferring images from the danger zone.

Accordingly, the question as to which is better. parking sensors or a rear-view camera, will imply a comparison in terms of different operational effects. This means that the first option in the form of a parking sensor is suitable specifically for inexperienced drivers who want to reliably protect themselves while parking. And a video camera is more likely to suit an experienced driver who just needs to have a way to independently assess the situation through visual control.

The presence of electronic assistants in car equipment has long been no wonder, even in the budget segment. The simplest assistants in different variations find a place even in budget cars and, as a rule, they are all focused on simplifying the driver’s functions and increasing driving safety. One of the most popular of this type is the rear view video camera. It allows you to monitor what is happening in the so-called blind spots, not to break away from observing the main direction.

Partially the same tasks, but according to a different principle, the parking radar solves. The purpose of this device is somewhat specialized, but this does not diminish the importance of its function. One way or another, the question of which is better. parking sensors or a rear-view camera is quite justified before many motorists. To answer it, you should understand in more detail how these systems differ and what are their advantages.