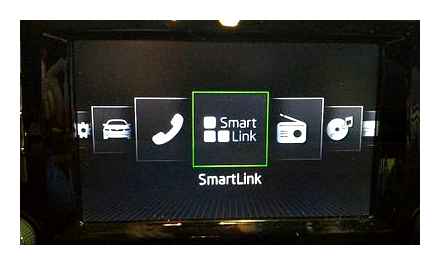 Now it is possible to activate the SmartLink function on the Skoda Octavia III (A7) 2016m. produced in Russia. Previously, this useful feature was only available for Skoda assembled in the Czech Republic. If the VIN of your car starts with the letters XW and the 10th letter of the G code, then contact us and you will be able to display the information on the display of the information system (radio) by wiring your phone to the USB connector of the radio.

The list of phones supporting this function can be found here http://www.mirrorlink.com

Mobile devices such as smartphones have enabled consumers to access a growing number of interactive and useful applications anytime, anywhere. However, once the user gets into the car, access to such applications and their capabilities is severely limited. either because there is a restriction for the use of some applications in car infotainment systems (IVI) or because of problems of interaction with the small screen of the mobile device. docked.

In the automotive environment, the opposite is true: the smartphone becomes the server and the car infotainment system becomes the client. TCP / IP over Bluetooth or USB usually acts as the main communication protocol between
the phone and the car, while the Bluetooth Serial Port Profile (SPP) or USB Communication Class (USB CDC) device communicates at a lower communication level.

MirrorLink (formerly known as Terminal Mode) was designed to provide technology that enables seamless communication between a smartphone and an in-car infotainment system. The technology is extremely simple from the consumer’s point of view. As shown in the picture, the user installs it in their car (1), connects to the phone with a USB cable (2) and can immediately use all the applications of the phone in the car (3).

Using VNC as the underlying technology, the user’s car software displays the graphical user interface implemented on the smartphone. Often, the user’s software will scale the displayed phone display to fit a portion of the display in the vehicle.

While mobile devices provide and execute all applications and services available to users, the car infotainment system provides the necessary input and output physical characteristics, such as a color display, speakers and microphones of the system, as well as some other user devices. input. These can include. touch screen, steering knobs, steering wheel or additional buttons. This will allow the consumer not only to securely access their favorite mobile apps while driving, but also to benefit from high-performance IVI systems.

MirrorLink is described by a set of well-formed, non-proprietary standards. IP technologies are used for physical layer independence. However, traditional in-car communication solutions remain, such as Bluetooth HFP and A2DP support. MirrorLink provides support for both wired and wireless communications. In addition to unlimited access to the user interface of a mobile device, Universal Plug and Play (UPnP) is used to access only a limited set of pre-announced applications.

When using the client terminal in a car, there is no need to update the car software to use the new smartphone applications. In addition, since the main VNC server provides a screen capture, all smartphone applications can be configured with their own in-car user interface. VNC is also used to provide support for keyboard and touch events. In addition to Bluetooth, audio can be transmitted via Real-Time Protocol (RTP) over UDP.

See also  How to activate SIM card on iPad. How to configure call calls to iPad?

Since MirrorLink allows any traditional mobile device application to be displayed on a car display, it is easy to develop mobile devices based on automotive applications using an automotive user-level interface and optimize the functionality of the vehicle. Technology specification is publicly available.

VNC provides support for both terminal mode and Apple’s iPod Out technology. Apple iPod Out allows the head unit to display iPhone or iPod touch content, including music menus and album art; new iPod functions are supported, without software changes. In this case, the user sees the interface already familiar to him.