How to make a CCTV camera from a WEB-camera

Good afternoon, dear readers. A couple of days ago, I came up with a very interesting idea to make a video surveillance camera out of an ordinary WEB-camera. And now it’s time to share my idea with you and teach you what I was able to make from old junk.

Many people buy special systems for organizing video surveillance, spend a lot of money on them, because they do not know that such equipment can be made by themselves, for example, from an old WEB-camera, which they have not used for a long time.

First, you need to make sure that your old camera actually works. Connect it to your computer and check if it works for you. If it works, then install the Ivideon program and run it. After starting in the first window, select “I do not have an Ivideon account yet and I want to create one” and click next. 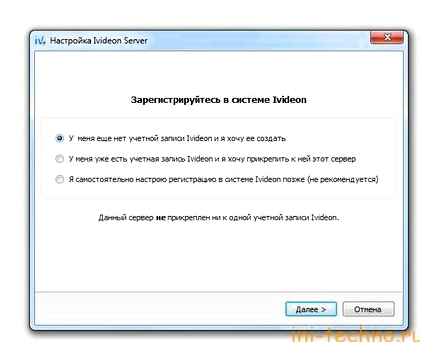 In the next window, fill in all the fields and click “Create”.

Then you can see the cameras connected to the computer, if they are not there, then you have not connected the camera.

We adjust the autorun parameters, I think there is no need to explain anything here, you yourself will understand.

After completing the program settings, you will see a small window similar to the one shown in the picture below and a web page on which you can always view your broadcast (there is no screenshot of the broadcast page).

In the program settings, you can specify the quality of the recorded video (the setting is available only if the broadcast is currently stopped).

Double-clicking on the name of your camera in the program window and clicking on the “Settings” item, you can enable and configure, if necessary, the motion detector.

And that’s not all, you can watch the video broadcast from your mobile devices running on the Android platform by downloading the mobile version of Ivideon.

Well, that’s all, as you can see, there is nothing complicated, after completing all of the above, you will get a powerful video surveillance system made from a regular WEB-camera and using a special program. If you have any questions or something did not work out, then do not hesitate, ask them in the comments.

Before you start spending money, effort and time on the selection and purchase of equipment, it is worth evaluating all the pros and cons of the decision made. After all, it’s not for nothing that many users, when organizing video surveillance, prefer more serious equipment, and not profitable and easy-to-use webcams.

Benefits of using a webcam for video surveillance:

There are not so many disadvantages of video surveillance via a webcam, but you should not consider them insignificant:

Considering all of the above, we can draw the following conclusion: for everyday tasks, when you need to make sure once again that a certain object is safe, video surveillance using a good webcam is perfect. If it is intended to exercise careful control over a sufficiently large area (supermarket, warehouse, etc.), it is better to use more serious equipment with high image clarity and the ability to simultaneously display several cameras at once.

Setting up the software

In order for the camera to start transmitting the image to a computer, and even broadcasting it to the Internet with the possibility of further viewing on any device, the user will need special software. Further, the process of setting up video surveillance using the most popular IVideon program from the cloud service of the same name will be discussed in detail.

In order to remotely observe what is happening around the webcam, you need to download the IVideon Client program, available for devices based on Android, iOS, Windows and Ubuntu. After installing the software on his device, the user needs to enter the login and password to his account, after which he will immediately be able to access the image from the webcam connected to the cloud video surveillance service.

There are other programs for video surveillance:

See also  How to enable WEB camera on MSI

Considering that the functionality of all these programs is almost the same, the user can safely download and install any of the above options.

Installing a webcam for surveillance

To create a simple video surveillance system, you will need the following elements:

Establishing a video surveillance system begins with the installation of equipment. First of all, you need to place the camera in the planned place: above the computer screen, a door in a room or an entrance. You can also implement covert video surveillance. for this, it is enough to hide the device in any secluded place so that it can calmly monitor what is happening, while remaining unnoticed.

Next, you need to connect the camera to the PC using a USB cable and the corresponding connector. If necessary, if a home-made video surveillance system also implies a significant distance, you should use a special extension cord.

It’s time to install drivers for the camera, which are usually included in the kit and without which the correct operation of the device is almost impossible. At the same time, it is possible that everything you need for a webcam is either already in the computer’s operating system, or can be found using the Internet. In this case, it will be much easier to establish a video surveillance system.

After setting up the equipment, it remains only to install a special program on the PC for video surveillance. Further, the software options that can be used for this purpose will be discussed in detail.

How to organize video surveillance through a regular webcam

Today, video surveillance is one of the most popular methods of constant visual observation over the protected area. To organize such a system, many people purchase expensive security devices, the installation of which requires the assistance of a number of specialists. In fact, such equipment is quite possible to make yourself. To do this, it is enough to know how to make a video surveillance camera from a webcam.

Implementation of video surveillance using a webcam may be necessary in a situation when, for example, you need to look after an object that does not require special protection. This could be:

In all these cases, the purchase of a full-fledged video surveillance system, which includes special cameras, a hard disk and other additional equipment, can be quite costly, and it also requires a lot of time to install and configure. It is much easier to install video surveillance through a WEB-camera. this method does not require large financial costs, and in addition, if you configure several devices at once, you can organize full-fledged monitoring of the desired object.

See also  How To Take A Photo From A Web-Camera

Having dealt with the question of how to make video surveillance through a webcam, anyone, even a novice PC user, will be able to organize a powerful video surveillance system without spending a big sum on the purchase and setup of professional equipment. All that may be required as a result is the webcam itself, software for it, attentiveness and strict adherence to the instructions provided.

How to set up an IP camera on Android

You can install the application on an Android gadget using a Google account. After installing the application, you need to decide how you will use the phone: as a surveillance camera or receiving station.

Log into the Google account to which the gadget camera is linked and set up access permissions for the accounts from which you will watch your stream. In the application settings, you can additionally activate the motion sensor and choose whether to record sound. To avoid unauthorized access to your phone camera, we recommend that you set a password to lock.

With your Google account, you can access everything your camera captures, even when you are outside your home network. This works either with another Android device or through a browser on the alfred.camera site. It is especially convenient that in addition to video in the “live” mode, you can also see the current battery level of the shooting phone.

You can access the broadcast even from a computer

While it’s easy to turn a mobile device into a security camera, there are a few things that Honor has to do: First, it goes without saying that the camera shouldn’t be used to capture someone who doesn’t know about it. This can lead not only to sad consequences for the camera, but also to legal problems.

Secondly: no matter how cool the app we recommend looks, its developer wants to make money on it. Obviously, along with the application, you will receive not only a surveillance camera, but also advertisements. True, you can get rid of it by purchasing something in the application.

How to make a surveillance camera from a smartphone

It is very easy to turn a smartphone or tablet on Android or iOS into a surveillance camera. You just need to install the free app and configure it correctly. We will tell you how to do it.

If you have already hidden your old gadgets, it’s time to get them again, because it is very easy to make a surveillance device from a smartphone or tablet. You only need to download and install the required program. Alfred app for Android or its iOS version will help you to use your phone as a video surveillance camera.

This app has two big benefits. First, it is easy to install and easy to use. And, secondly, it will allow you to monitor the camera even from a computer in Videostream mode.

Your data is safe

Another serious question remains open: Will your privacy suffer? The manufacturer gives a rather detailed answer to it. So, when streaming in “live” mode, the data goes through the peer-to-peer network and does not reach the provider’s servers. But the provider has the right to process some personal data: for example, the location of the camera. Therefore, before you install the application, check the terms of use.

If you don’t have an extra smartphone to make a tracking device out of it, see our rating of IP cameras that CHIP has tested in its laboratory.