For some users on iPhones and iPads, music is not the place to take up the most space in apps or photos. But there is no need to manually download music to a mobile device via iTunes for a long time. Music streaming service Apple Music allows you to listen to any music directly over the Internet, without resorting to downloading songs directly to the memory of the iPhone or iPad (although there is such an opportunity). 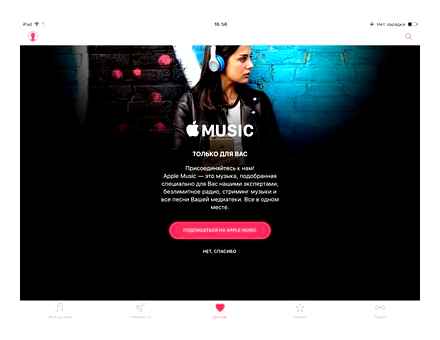 Apple Music subscription is paid (169 rubles per month), but the first three months Apple allows you to use the service absolutely free. For this not the largest amount, you get access to tens of millions of songs, personal selections, thematic radio stations and other music content. In order to start using Apple Music, you just need to go to the “Music” application and start the registration process.

One of the most effective ways to free up iPhone or iPad storage is to delete old or unwanted photos and videos. The process of deleting itself is very simple. you just need to go to the “Photos” application, select the photo or video that you want to delete and click on the icon with the image of the trash can. However, immediately after that, the files will still remain on the device and will take up space.

To properly completely delete photos and videos after moving them to the trash, go to the “Albums” tab, select the “Recently Deleted” album and click “Delete All”. Only after confirming the deletion will the pictures and clips disappear completely from the device.

There is another way to optimize the Messages application. You can set a limit on how long messages are stored in the device’s memory. To do this, go to the menu “Settings” → “Messages” → “Leave messages” and select “30 days”.

Please note that after setting this parameter, all text messages will be deleted from the device’s memory forever 30 days after receiving. If you care about the history of your correspondence, then it is better to ignore this method and go to others.

The easiest way to free up space on your iPhone and iPad is to reboot. It not only provides a performance boost, but also removes the iOS cache, which grows daily after almost every action you take. You can verify the benefits of reboots in iTunes. The ill-fated “Other” section, which represents all the “garbage” stored on the device, in some cases takes up several gigabytes. Rebooting, alas, does not completely clear the cache, but, nevertheless, reduces it.

It is recommended that you restart your iPhone or iPad at least once a week. If you use your mobile device especially actively, constantly downloading applications and working with them, then it is advisable to reboot daily.

There is another useful feature in the Photos app that you might want to disable to free up space on your mobile device. This is iCloud Photo Sharing, a feature that lets you create shared albums with other users and subscribe to albums that have already been created. The downside of the function for iPhone and iPad memory is that all photos from albums you subscribe to are automatically sent to storage, where they begin to take up space. In order to disable the function, you need to go to the “Settings” → “Photos and Camera” menu and switch the “Share iCloud Photo” switch to the inactive position.

Third-party developers have created a huge number of utilities to clean up junk from iPhone and iPad. Many of them, for example, PhoneExpander, PhoneClean and others, really do their job, sometimes freeing up several gigabytes on Apple mobile devices. These utilities are usually very easy to use. You just need to run the program and start cleaning up temporary files.

See also  How to create a hidden album on iPhone

And another very obvious way to free up memory. On iPhones and iPads, many users quite often have a lot of unnecessary applications and games installed that have not been used for a long time. Go through the pages of the home screen, open old folders and delete everything you don’t need from your device. Despite its simplicity, this method is one of the most effective, since users sometimes simply forget that this or that application is installed on their device.

Attachments in messages in the application of the same name can hang in the memory of an iPhone or iPad with a similar load. In order to deal with them, start the “Messages” application, open any dialog and click the “Details” button located in the upper right corner. After that, hold down on any attachment until a pop-up menu appears. In it, select the “” item, mark all unnecessary attachments and click on the trash can icon to remove attachments from the device.

This feature allows the device to automatically collect the last thousand photos and distribute to other devices.

You yourself may not notice how the screenshots “multiplied” in the gallery and took up a lot of free space.

It is best to completely uninstall the application and then install it again. Make sure you remember your username and password.

Set a limited retention period for audio and video messages

With each new version, more and more errors are eliminated, the stability and performance of the system are increased.

To do this, go through the various directories. Pay special attention to temporary folders, files in which are deleted after a while.

With Finder and iTunes and categorize files from the cache, like others, reported music or video usage may differ. To view usage on your device, go to Settings General [device] for storage.

Read the description of each recommendation, then select Enable to enable or click on the recommendation to revise the content can be deleted.

The content used on your device is divided into the following categories: