PC based video surveillance is a simple budget system, built without the use of hardware video recorders. The computer itself is reliable, functional, and most importantly, it is already in stock.

All that remains is to choose suitable cameras and configure the required software. 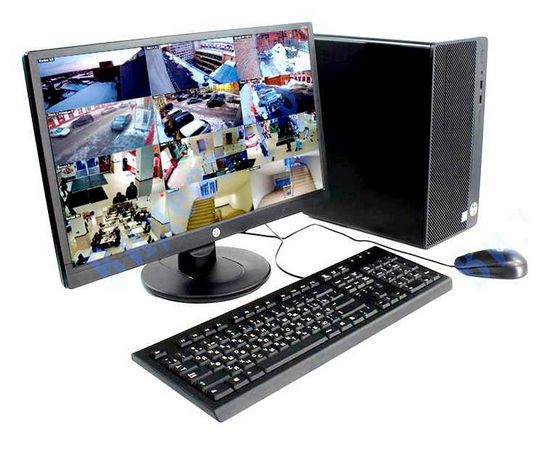 Pros of using a computer

The hardware of a personal computer is used as a recorder, so there is a need to buy additional equipment, for example, a hard disk.

The computer, as a rule, is already connected to the Internet, so setting up remote viewing of cameras does not cause any problems. It is enough to download the free mobile application and set up the connection. The recordings themselves will be stored on the hard drive of the computer, and the mobile application will allow you to view them remotely from anywhere in the world.

Cameras for video surveillance via PC

The principle of operation of any video surveillance system is reduced to receiving a video signal and transmitting it to a recording or viewing device for subsequent digitization and storage. The recorder can be a recorder or, as in this case, a computer.

There are many types of video cameras. And almost all of them can be connected to a computer.

Let’s consider the main types of cameras that can be connected to a PC:

Video surveillance based on video capture cards and analog cameras

Analog Wired Cameras Most common in CCTV systems. They are simple and cheap equipment that has a wide range of applications: outdoor, indoor, anti-vandal, miniature, etc.

An analog video surveillance camera can be selected to solve any problem of organizing a security system. However, special hardware is required to connect them to a computer. video capture card.

The principle of operation of this type of video surveillance systems consists in broadcasting an analog signal from cameras to a video capture card. This board serves as a DVR. It digitizes the signal, which is then displayed on the monitor as a broadcast in the online mode; in parallel, video is recorded from cameras to the PC hard drive.

4, 8, 16 or 32 CCTV cameras can be simultaneously connected to one such board. This is the number of connectors provided on different types of standard boards. To scale such a video surveillance system and include more cameras in it, it is enough to install one or more video capture cards in the PC system unit.

Auxiliary equipment are power supplies, power cables and cables through which the signal is transmitted.

It is worth noting that it is impossible to install a video capture card in a laptop, since K. There is simply no place in it.

IP cameras for connecting to a computer

In the case of video surveillance via a PC, IP cameras are most often used. Here they differ from analog ones only in that they transmit a ready-made digitized signal. It remains only to write it down.

There is also a huge number of types and types of IP cameras, from which you can choose suitable for solving any task.

Consider the advantages of digital cameras for organizing a video surveillance system through a computer.

In the case of creating a simple budget video surveillance system through a computer, the best solution is to use ordinary web cameras, which are connected to a computer via a USB connector.

Webcams are affordable, easy to use, and often include a microphone.

Another advantage of web cameras. they are often in stock too. In this case, you can install a video surveillance system almost free of charge.

The only drawback of such cameras. this is a short USB cable. Therefore, the webcam should be placed close to the system unit or laptop itself. USB cable can be extended using passive or active extenders.

Webcams are the ideal solution for creating small, mini and even micro (1 camera) video surveillance systems.

Whatever types of cameras are used, but the system requires software. The program runs on a computer and performs the following functions:

In the case of video capture cards, the software is supplied in the kit. In all other cases, you need to install the program separately. Video surveillance software is divided into three classes:

Personal computer, laptop or powerful server. it is an important and functional part of a video surveillance system. On the basis of the PC, you can create any complexity and size video surveillance system. here is one camera, up to several tens or even hundreds. The computer has a wide range of functionality, which is not available for the recorder:

If you need to install a video surveillance system through a computer, please contact us! We offer a wide range of equipment and carry out installation and configuration.