All ways to connect your Xiaomi smartphone to your TV

Xiaomi devices with the proprietary operating system MIUI can be connected to the TV in several ways.

Wi-Fi Direct is the most convenient and common way to connect your smartphone to the TV, but unfortunately it only works on TVs that support Smart TV. To connect the devices, it is necessary that both the phone and the TV must be connected to the same Wi-Fi network; if so, proceed to connect.

Open the settings of your smartphone and find the item “Wireless Networks.

Find the option with the same name in the TV settings and enable it.

Find your Xiaomi in the list of devices and select it.

The broadcast from the phone screen will start automatically;

If your TV does not support Smart TV technology, you can always buy a Smart TV Box, which will turn an ordinary TV into a modern “Smart TV.

After pairing, you’ll see a phone icon on your TV screen. Now on the big screen you can play the files recorded in the phone memory, or display the broadcast from online services, like YouTube.

The advantage of this method is the absence of interference and extra wires.

The fastest way: just turn on Bluetooth on your phone and TV and then press “Pair”.

However, not all televisions have a built-in Bluetooth-adapter, so this method will not work for all users.

If necessary, you can purchase an external Bluetooth adapter that connects to the TV via the USB connector.

This method requires a USB cable: you can use the one you use to charge your phone.

With this connection Xiaomi will act as a flash drive: you can view only the media files that are recorded on the phone.

Streaming in this case, to organize it will not work.

To connect, simply connect your smartphone and TV with the wire, and select the USB port on the TV as the signal source.

This method allows you to broadcast an image from the smartphone screen to the TV. The HDMI adapter is not supplied with the phone, it must be purchased separately.

Purchase either Micro-USB to HDMI or USB Type-C to HDMI, depending on the charging jack on your smartphone.

If the image does not appear on the TV screen, go to the settings of your smartphone, the item “HDMI Format”, and select the data transmission with a lower resolution.

Wired ways to connect Xiaomi Redmi 8 to the TV are not the most convenient due to the use of cables, but at the same time, such options do not require advanced technical equipment TV-receiver.

This is the easiest way to connect the phone to the home screen. To implement it, the owner of Xiaomi Redmi 8 will need a USB cable that comes with the device.

At the same time the smartphone itself confirms data exchange with the TV, selecting the connection as a media device. If everything is done correctly, the TV receiver will identify Xiaomi Redmi 8 as an external drive, and using the remote control you will play photos, audio and video on the TV screen.

This method is more complex, but also more functional. If when you connect via USB to the owner of the devices offers a basic set of features that allow you to perceive Xiaomi Redmi 8 as an external drive, then when you pair through HDMI on the receiver screen will pop up the desktop smartphone, and will display the actions performed on the phone. In particular, the launch of certain programs.

The complexity of the method is that Xiaomi Redmi 8 is not equipped with an HDMI port to connect to the TV. But this drawback can be bypassed by using an MHL adapter or SlimPort. You can buy the appropriate accessory at an electronics store for 200-300.

The connection will be as follows:

Xiaomi Redmi 8A is a full-fledged multimedia device, which in standard use scenarios does not require synchronization with home equipment. But sometimes you need to connect your smartphone to the TV to get access to the following features:

The owner of Xiaomi Redmi 8A can add to the list presented, showing his own imagination. But the fact remains that connecting your phone to the TV is a feature that the developers have built into the Xiaomi Redmi 8A.

There are several ways to set up a connection between the two devices. Both wired and wireless options are considered. The choice of a particular method depends on various reasons, including the technical equipment of the house, as well as the functionality of the TV. Therefore, it is recommended to consider all possible ways before connecting.

Wired ways of connecting Xiaomi Redmi 9 to the TV are not the most convenient due to the use of cables, but at the same time, these options do not require advanced technical equipment TV-receiver.

This is the easiest way to connect your phone to your home screen. To implement it, the owner of Xiaomi Redmi 9 will need a USB cable, which comes with the device.

Then you need to insert one part of the cable into the smartphone and the other part into the TV receiver. After that it remains to open the TV menu using the remote control and select the involved USB-port in the connection menu.

At the same time the smartphone itself confirms the data exchange with the TV, selecting the connection as a media-device. If everything is done correctly, the TV receiver will detect the Xiaomi Redmi 9 as an external drive, and with the remote control you will play photos, audio and video on the TV screen.

This method is more complicated, but at the same time more functional. If the connection via USB to the owner of the device offers a basic set of features that allow you to perceive Xiaomi Redmi 9 as an external drive, then pairing via HDMI on the receiver screen will pop up a desktop smartphone, and will display the actions performed on the phone. In particular, the launching of certain programs. 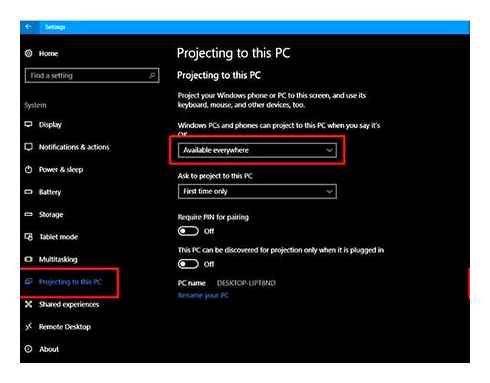 The complexity of the method is that Xiaomi Redmi 9 is not equipped with an HDMI port to connect to the TV. But this drawback can be bypassed with an MHL or SlimPort adapter. To buy the appropriate accessory is possible in electronics stores at a price of 200-300.

Connection will proceed as follows:

How to connect your Xiaomi phone to the TV

How to connect your Xiaomi phone to the TV? It turns out very simple, if you have a modern SmartTV it probably supports Miracast technology, you just need to connect the two devices, that’s what we will do now!

What will allow you to connect your Xiaomi to the TV? There are a lot of options:

How to connect your Xiaomi phone to the TV? (on MIUI firmware)

Go to “Android Settings” and then to “Advanced Features. Select “Wireless Display”.

Activate “wireless display”, then Xiaomi will find the TV, you just have to connect the TV. If all went well, the TV will display the image from your Xiaomi phone.

Go to “Settings” under “Screen” and then to “Broadcasts”

Then activate “Broadcast” and wait until the TV is detected, and then you can connect to it. If all went well, the TV will display the image from your Xiaomi phone.

If you have a regular TV?

If you have an old TV or no Miracast support, you might think that’s the end of it But no, there is a way out! If your TV is equipped with an HDMI connector, you can install a special adapter that will receive the signal from the phone and transmit it to the TV.

As another option which has its own advantages and disadvantages, buy the MHL-cable.

The advantage is that there is a direct connection, no delays and interference, and the disadvantage is that not all phones support this connection. So before you buy it is better to find out whether your phone supports the MHL technology.

For recommendations, go to the developer’s website. Here comes the disappointment. Intel’s last post on WiDi was in October 2017. The company is scrapping all work on this project because it has no future. But it lets you use it, so that’s good. Well, what to say, they know better.

For users with Windows 8.1 and 10 there are no problems in configuring, the mechanism is prescribed in the system itself, for versions 7 and 8 you need to install additional software from Intel. Download, according to the bit mode of your system, the software version from here.

Directly on the hardware, the recommendations are as follows (taken from the original site):

Keep in mind that all of the above is designed for stationary system unit, which can be equipped in advance, offering the store the selected list.

If you have a laptop, with its configuration is more complicated. Choose to buy the newest models, equipped with components from Intel. Processor, graphic card and WI-FI adapter.

Let’s move on to the TV. It must have a built-in chipset that supports WiDi Miracast. Look for a mention of this in the settings. I must warn you that even relatively recent models, even the most famous brands, such as Samsung and others, may not apply this development. Then you will have to use an external adapter, with an HDMI connector. For older TVs (without HDMI) there is the possibility of connecting via tulpan.

In general, it is not unreasonable to stock up on an adapter with a colorful label Miracast (sold in huge quantities in China at a ridiculous price).

As for the requirements for the phone, they are not too weighty. You must have Android 4 or higher installed.2, and the MIUI shell, in recent versions, will probably offer you to connect a wireless display.

Connecting your Xiaomi phone to the TV

Xiaomi phone connects to your TV using Miracast technology, via USB connector or HDMI cable. The type of connection defines the maximum quality of the signal: limitations on video resolution, bit rate, HDR/HDR10 compatibility. The key point is that the phone and the TV must support the standards/technologies mentioned below, otherwise you won’t be able to connect the devices.

Step by step connection of Xiaomi phone to TV

Connecting your phone to your TV allows you to view photos and videos saved in the memory of the device on the big screen, launch presentations or play games using the gadget as a console. Also, in the absence of Smart-TV, connecting to a mobile device will help to use the digital TV.

Connecting when there is no wireless transmission via HDMI

The easiest method to broadcast from your phone to your TV screen is to connect your Xiaomi through an HDMI cable. Connector for it is standard and present on all major brands of modern blue screens such as LG, Samsung, Sony, Philips, etc.п. This is usually located on the TV-gadget near the USB connector, but is noticeably larger.

On phones, on the contrary, the HDMI-connector can be found only in exceptional cases, so you should buy a special cable with a connection through the micro-USB connector. The following instructions will tell you how to connect your Xiaomi phone to your LG TV:

If you follow these rules, you shouldn’t have any problems with the sound and picture output. There must not be any distortions during the playback of files, the quality must also be original. If the video does not broadcast on the TV, you should look for the cause in the phone itself.

To do this, go to your Redmi or another of your Xiaomi models in the settings, find the HDMI section, which will be a menu item called “HDMI Format”, where you can select the refresh rate and resolution of photo and video files. You need to know the parameters of your television device, and adjust the settings on the phone under these parameters, otherwise at high settings, files can not play correctly.