Pairing Xiaomi TWS headphones with the phone and with each other

Pairing of wireless headphones is the mode of the first connection to the sound source, is necessary for the exchange of security keys to establish a connection protected from interception.

Xiaomi TWS AirDots wireless headphones, like any other, require a pairing procedure before first use with any new audio source.

It is held once, after which the devices remember each other, and the next time you turn them on, if they are both in range of Bluetooth, the connection is automatic.

After we receive the headphones in the parcel or buy them in a store, we come home and the first thing we try is to connect them to the phone. But it is often the case that only the left or right one connects.

But both Xiaomi Redmi AirDots do not want to play music. This is what happens when we rely on our intuition without reading the instructions. Although in Russian it can not be in the kit (at this link you can find a Russian-language manual).

Headphones from different brands often have their own way of pairing with a cell phone or other device via Bluetooth. This emphasizes their individuality and demands attention from users. Depending on the model, the connection methods may also vary. To find the information for yours, accurately specify the symbols from the name of the headphones.

Wireless headphones Xiaomi AirDots does not connect to the phone, what to do?

A distinctive feature of all fully wireless headphones, including Xiaomi AirDots, is the need to synchronize them with each other. In some models, this process is automated well, and the user by his actions can not break it, at least accidentally. In other samples, you need to strictly follow the sequence of operation, otherwise you can break the synchronization and when connected to a smartphone Xiaomi will play only one earphone, either right or left.

I suggest you read the Quick Start Guide, which allows you to remove the AirDots settings and pair them to your Xiaomi phone again, which will allow you to configure both the synchronization between the headphones and the Bluetooth connection to your smartphone.

Go into the Bluetooth settings on the phone, find in the list the name that you want to delete, press and confirm your intention with the “Undo Pairing” button. Next, we need to reset the settings in the AirDots, this is done as follows:

If you follow these instructions, the connection will be set up so that both headphones will work simultaneously.

How to connect the AirDots Pro 2 headphones to your smartphone? 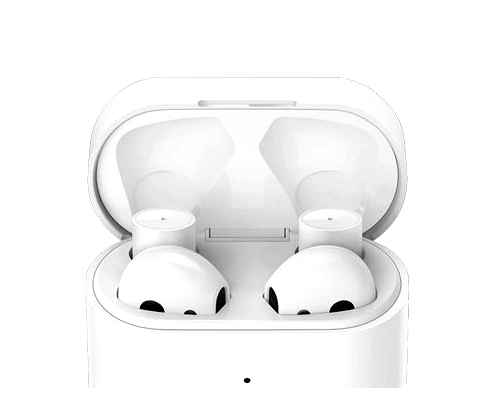 It is worth noting that the headphones have different names Mi AirDots Pro 2, Mi Air 2 and Mi True Wireless Earphones 2, but they are the same kind of headphones with names for different markets.

In the list of available devices we find Mi True Wireless Earphones 2. Click on this name and accept the pairing request, in which you can allow the exchange of contacts. Regardless of the version of the headphones for the global market and the Chinese market, the name in the list of available devices will look exactly like Mi True Wireless Earphones 2.

After a successful connection, device status and charge level will appear in the paired devices menu. The headphones are plugged in and ready to use. In future use, the Xiaomi Air 2 headphones have an auto-pairing function, so next time they will connect to your phone (if it has Bluetooth enabled), as soon as you open the case with headphones. There is no need to take the headphones out of the case anymore. Auto-connect function is supported only from MIUI 11 version.

By default, the following functions are assigned to the touch control buttons:

When a call comes in, a double tap on either earbud will answer the call.

Double tap the right earphone when listening to a track. pause/playback.

How to connect Redmi AirDots headphones to your smartphone?

The Redmi AirDots wireless headphones, also known as Mi True Wireless Earbuds Basic. Consider connecting two earbuds to your smartphone at the same time, as well as the option to connect one as a mono-headset.

Before you use the device, it is necessary to remove the protective film from the contact surfaces of the headphones, put them in a case and charge them. Indicator light glows red while charging. When fully charged, its color becomes white, and after 1 minute goes out.

You need a Bluetooth enabled smartphone and Redmi AirDots headphones to connect. The earbuds turn on automatically when removed from the case. Connecting two headphones to the smartphone:

Go to your smartphone: in the Bluetooth menu, search for available devices.

In the list of available devices find Redmi AirDots_L. This is the left earpiece. Press this name and accept the pairing request, in which you can allow the exchange of contacts. Depending on the version of the headphones: Redmi AirDots or Mi True Wireless Earbuds Basic, the name in the list of available devices may be different. If you have the Mi True Wireless Earbuds Basic version, they will be listed as Mi True Wireless EBs Basic_L. The only difference between the versions is that one is made for the domestic market in China, and the second for the global market. This has no effect on functionality and operation. The package and specifications are identical. But the price can be different.

After a successful connection, in the menu of paired devices you will see information about the status of the device and its charge level. Headphones connected and ready to work. Now after the first successful pairing, the Redmi AirDots will automatically connect to the previously paired device if it has Bluetooth enabled.

What to do when the headphones do not pair with each other?

The communication between the headphones can be established by resetting the Bluetooth modules.

If after resetting your smartphone began to see the left and right earbuds separately, you need to connect only the right one to the phone, and when it starts playing sound, you need to press the power button on the left. it should connect to the right.

If it didn’t work the first time, try resetting again. Also, as a last resort, it wouldn’t hurt to clear the “Bluetooth” app data on your device.

To pair your Xiaomi Redmi AirDots and your smartphone, do the following:

How to synchronize TWS AirDots with your Xiaomi phone

Place both earphones in the charging case for about 10 seconds, then remove them from the case.

In some cases you will see a separate name for the left and right earbuds, if this happens, choose the right one and sync your Xiaomi phone with it, t.к. It is the master of the pairing. Once the pairing is complete, the sound should appear in both headphones, synchronization completed successfully.

When plugging in headphones, users often find that one headphone plays music and the other doesn’t. Although both earmuffs show up in the list of connected devices in the Bluetooth menu.

This may be some kind of factory defect in the entire line of AirDots. Or a flaw in the model with a synchronization problem. This is also due to the fact that the headphones can be separated. You can only connect one of them to your phone, while the second one is connected to your laptop. Or to lend it to another user to listen to music on his smartphone.

Even if you try to connect a second Xiaomi AirDots earphone in parallel, it will be connected and the second one will be disconnected. And it will go on and on and on. Let’s look at how to synchronize them correctly.

When unpacking, you need to remove the case with the earmolds from the package:

This instruction will be useful for those who have not yet connected AirDots to the phone before. If you have already done it and were unsuccessful, read the next section of this article.

If the sound comes only from the right earpiece, touch the touch area on the left earpiece to connect the second one.

According to the manufacturer’s idea, when you take out both headphones, they should automatically connect to each other. First there is frequent blinking on both, then only on the right headset the LED pulsing slows down, this means it is ready for pairing.