In this article we will try to answer the question “is it possible to make cameras for fishing with your own hands.” As soon as we are talking about devices made by hand or in small editions, it is necessary to immediately highlight 2 points: devices that are assembled in order to save money and get something functionally similar to factory counterparts with a cheaper cost, and professional devices with functionality and characteristics higher than in all existing analogues. 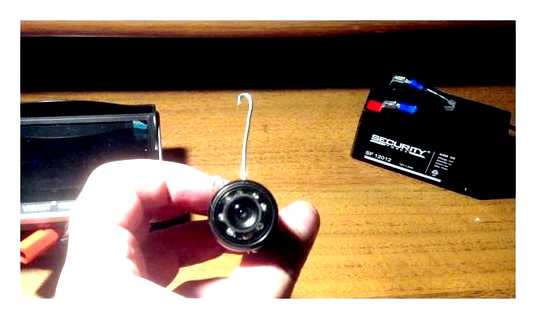 In this article, we will consider only the first option, that is, how much you can assemble a camera for fishing yourself and how much cheaper / more expensive than factory counterparts it will turn out.

Recently, it appeared on the network how to assemble such a camera yourself. Here’s a good option from our point of view. The only thing is that it will not work for a very long time in the cold and it will “chatter” a lot in the water, but you can use it if you want.

First, let’s look at the components of any fishing camera:

Regarding the monitor. everything is simple, according to Yandex.Market, the simplest car monitor will cost around 1800-2000 rubles.

The camera module with the characteristics we need is not used anywhere except cameras for fishing, and costs from 4000 rubles. This means that we will select from what else is on the market. Of the whole variety of cameras, only car rear-view cameras are suitable in size, costing from 1000 to 2000 rubles, however, car cameras rarely provide for the camera to work when fully immersed in water, that is, at least IP68.

The cost of cameras with IP68 is significantly higher, and amounts to 2000-3000 rubles, but any camera is not suitable for us, since under water conditions, illumination is necessary, moreover, unlike car cameras, the illumination must be infrared to ensure visibility in muddy water and extremely low light. It is not easy to find such cameras, but it is possible, sometimes manufacturers use a hybrid circuit, white IR LEDs, costing about 2500-3500 rubles.

Let’s omit the cost of the cable that you need to connect the camera and the monitor, and let’s just say that no car cameras are equIPped with a cord longer than 2 meters, so we will not mention sealing and soldering the cable to connect it.

So, after finding a camera and performing all the manIPulations, you acquired a camera module and a monitor, costing from 4300 to 5500 rubles. It would seem that one could go directly to the battery, but one important detail remains. By extending the cable by 20 meters, we did NOT amplify the signal coming from the camera at all, and with such a cable length, taking poor illumination and low resolution of the camera, without an amplifier you risk watching NOT fish on the screen, but interference.

So, we need a TV amplifier, a car TV amplifier that operates at 12V. The cheapest option, according to Yandex, costs about 1600 rubles, and the total amount is already from 5900 to 7100 rubles.

The amplifier must be placed in the immediate vicinity of the camera, so we add to this amount the waterproof case (IP 68) and as homework we will leave you to think about how to seal it.

To power the device, essentially made from automotive components, we need a 12V battery of acceptable capacity. A capacity of 3500-4000 mAh should be enough for approximately 5 hours of operation. Batteries of this capacity, based on Yandex prices, cost from 1500 for lead models and from 4000 rubles for a non-Chinese and reliable Li-Ion. And one more nuance. You will have to charge it somehow. Add a power supply unit costing about 500r (for charging a lead battery), or 1000r (for Li Ion).

The total cost of a self-assembled camera ranged from 7400 with a lead battery, and from 9900 rubles for a model with Li-Ion.

This is the cost of a complete set, if you succeed the first time, and provided that the statement of the Chinese GoPro manufacturer about the protection class of the camera is correct.

Also remember that under these operating conditions you void the warranty for all separately assembled items.

The most important point in the creation of any of the elements of the landing net is the choice of material. Not only the reliability of the structure will depend on it, but also, which is important, its weight. The latter is especially relevant if the fisherman often goes to the reservoir alone, when it is necessary to wield the landing net with one hand, especially if playing is often done. In this case, it is best to use aluminum tubes or carbon fiber to make the handle. these materials are moderately strong, but relatively light in weight. If fishing is carried out more often with a partner, it makes sense to make a stainless steel handle for your tool. this material is much heavier than the above, but it has an extremely high strength and, as a rule, is able to withstand the resistance of even a very large trophy.

After the angler has decided what the handle of his landing net will be made of, it is necessary to decide on the design. The dismountable tool is more suitable for catching small and medium fish, as well as in the absence of a personal car. For trophy fishing it is recommended to use only one piece models.

The classic fishing net consists of three main parts, and they are:

The length of the handle varies in large part from the conditions of the reservoir in which the fishing takes place. If, due to the great depth, it is NOT difficult to bring even large prey to a distance of a meter from the coast, then it makes no sense to make a four-meter landing net for this.

The shape of the hoop is one of the reasons for the heated debate among experienced anglers. Everyone has a certain opinion on this matter, backed up by personal experience, which is why you can still find adherents of both ellIPsoidal, and triangular or rectangular landing nets. There are a number of recommendations for choosing the shape and design of the hoop, but in the end, the decision will have to be made by the fisherman himself.

The net, depending on the fish planned to be caught, can have a different mesh size and depth. This element of the landing net is most often purchased ready-made, however, if the angler wants to get a tackle that is ideal for his needs and in the reliability of which he can be sure, it makes sense to tie a net for it yourself.

How to make a diy fishing net

When making a fishing net, you can choose a simpler and more reliable or more complex and convenient option. Without taking into account the nuances, these tools can be divided into two main types:

The first type is distinguished by its simplicity of manufacture and increased strength, however, transporting such landing nets to the fishing site is rather problematic, since they take up a lot of space and often have a rather large mass. Folding models are more difficult to manufacture and require certain skills and ingenuity from the angler. Their transport length is many times less, which is why it is quite possible to carry some of them in a backpack, however, in terms of strength they are still inferior to solid models due to the presence of weak points in the area of ​​connection of elements.

In order to disassemble in detail the manufacture of a landing net with your own hands, this process is best broken down into several stages, describing the creation of SEPARATE parts of the tackle and their subsequent assembly.

Usually making telescopic and folding landing net handles is a test of the angler’s ingenuity and competition in who will choose the most suitable ready-made option.

However, if you want to make a reliable tool yourself from scratch, the angler will need:

In order to make a collapsible handle for the landing net, you should:

This design allows you to twist any number of elements together, which saves space during transportation and at the same time has a fairly good strength, especially if it is well soldered.