Why reversing cameras are on. The problem with Teyes cameras.

Let’s figure out why and how to avoid it. This also applies to connecting the front cameras.

Previously, with poor hardware and software, reversing cameras performed only one function. show the image while reversing. New radio tape recorders offer a number of others. Such as viewing images from the front or rear camera while driving. To provide this opportunity, manufacturers have proposed a wiring diagram. Let’s take a look at the scheme proposed by the renowned company Teyes.

If you look closely, then in this scheme it is proposed to power the camera not from the reversing lamp (although it is not considered correct anyway) but from the ACC signal. As you should know, the ACC signal appears when the key is turned for the first time (on different cars in different ways, but this is not the ignition mode). At this moment, the radio tape recorder also works. That is, the camera works constantly while the radio is on. This is just for the software to view the image from the camera while driving.

See also  The Computer Does Not See The Camera Via USB

Now let’s think about it. With this connection, the voltage of the vehicle’s on-board network is constantly applied to the camera, and this is not much, not a little, about 14 volts. Although the camera is designed for power supply with such a voltage, it is only for a short-term one. After connecting it to a special input or at least to the rear light, the camera is powered only when reversing. In these cameras, electronics are installed, which are designed for power supply mainly at 3.3 volts. This means that there is a simple stabilizer inside that reduces the voltage from 14 right up to 3.3 volts. So it does not withstand the constant load. Maybe it’s easy to check. Just touch the camera. She’ll be super hot.

And so they figured out the reason. The proposed wiring diagram is fundamentally wrong. If you do not need software for viewing while driving, then everything is just connecting the camera to the rear light and that’s it. But I would not do that, why if the radio tape recorders have a special power outlet. Firstly, it is already stabilized at 12 V. Secondly, the signal appears there only when reverse gear is engaged. Let’s consider the connection using the example of the same Teyes radio tape recorder. Plug F. 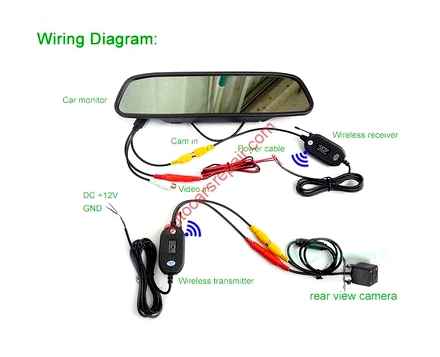 As you can see, there are two contacts. F7 and F8 to power the camera. But again, if you want to use the program to view the image while driving, then connecting the camera here it will not work. Since the power on these contacts appears only during the reverse gear. It is controlled bypassing the software and cannot be controlled from it. But if you do not need this, then the camera will work fine.

This stabilizer must be set to the minimum voltage at which the camera will work stably. At the same time, it will stop heating and will work without overload.