Canon EOS 250D. it is one of the lightest movable screen SLR cameras in the world.

For starters, it is worth noting that this camera, depending on the region, comes under different names. So, in North America, it goes under the name Digital Rebel SL3, in Europe. EOS 250D, in Japan. EOS Kiss X10, while in Southeast Asia. EOS 200D II. And that’s it, the names of one camera.

The EOS 250D also features a large grip tab like its predecessor, around which you can comfortably place three medium-sized fingers with your pinky finger supporting the base of the camera, providing enough support for using the camera with some of the larger lenses that Canon offers.

See also  How to shoot with GoPro 5

In terms of build quality, the Canon EOS 250D / SL3 certainly looks solid enough for an entry-level DSLR, although as you’d expect, Not quite in the same league as the company’s semi-pro models.

There aren’t many access buttons, but you’ll find controls for ISO and exposure compensation. For most of your other settings, the wheel will be your best friend. here you will find other settings such as white balance, metering, motion mode and so on.

If you want to adjust the aperture or shutter speed depending on which shooting mode you are using, you can use the dial at the top of the body.

Newbies will also love the Guided User interface, which explains how a number of settings work right on the screen. Helpful hints appear when switching between shooting modes and changing basic settings such as ISO or white balance.

In other words, it’s a great way to learn the ins and outs of photography, even if you’ve never used anything more advanced than a phone before.

The Canon EOS 250D is equipped with a 3-inch rotatable touchscreen. At 1040K dots This is not the highest resolution on the market, but considering the price of the camera, it would be expected. The screen shows a fairly bright and clear picture.

So that the screen is rotatable, has its advantages. This is especially useful when shooting from different angles, including face to face, which vloggers will appreciate. It can also fold inward to protect the screen, which is another benefit.

Since the Canon 250D is a DSLR camera, it has an optical viewfinder rather than an electronic viewfinder. And the viewfinder gives you 95% of the scene. This means that there is a possibility that various artifacts may enter the outer edges of the frame, which you will not notice during shooting.

Compared to most modern electronic viewfinders, the 250D looks a little compressed and small, but if you are NOT used to using something excellent, you may not notice the difference.

See also  How to connect your GoPro 8 to your TV

Shooting Conventionally, the 250D uses a slightly outdated autofocus system by modern standards. The 9-point AF system (when using the viewfinder) gives you a limited number of focus points to choose from, which can be tricky if your subject is NOT underneath.

You can switch to Live View mode where you have 3975 points to choose from. And this is a good option, especially considering that you can use the touch screen to quickly select the Most suitable point.

Screen-embedded shooting means you’re also using Dual Pixel CMOS AF, which has been used in many Canon DSLRs for a few years now and works pretty well. it is also useful when recording video.

The camera shoots at 5 frames per second, so it’s fair to say that if you’re shooting a lot of moving subjects, then the 250D is probably not quite the right fit for you. Even if you get something acceptable when shooting moving objects, it is more likely due to luck.

Given that the 250D appears to use the same sensor as its predecessor, it should come as no surprise that there hasn’t been a particularly noticeable improvement in image quality.

Fortunately, the image quality is pretty good in a wide variety of situations. Colors are vibrant and sharp, while Canon’s versatile metering system ensures optimal exposure balancing in most situations.

The 250D metering system produces well-balanced exposures in most situations, including complex combinations of light and dark. 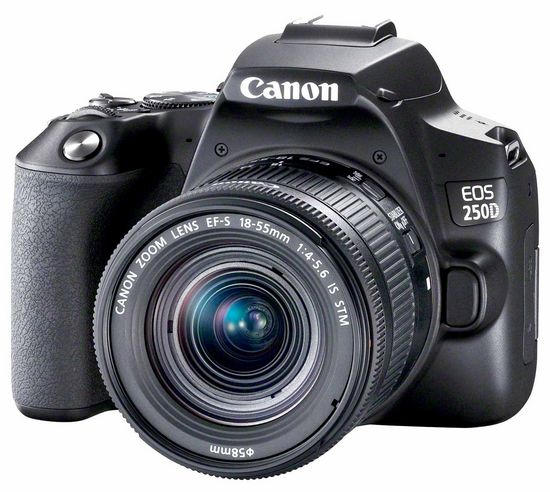 Auto White Balance provides good performance by accurately assessing colors even in mixed or artificial lighting conditions. Noise is well controlled throughout the standard ISO range, but you may see some loss of detail at the upper end of the scale, for example at ISO 6400. It is highly recommended that you stick to this level if at all possible.

Colors are crisp without the unrealistic oversaturation that many smartphones produce by default.

You will probably outgrow it over time, but as a starting lens, it is suitable for shooting a variety of subjects. It produces sharp and distortion-free images, but there are certainly more efficient optics in the EF and EF-S lens line.

What really sets the 250D apart from the 200D is the presence of 4K video. Due to the low price and form factor, the camera may well appeal to novice videographers and, of course, bloggers.

Noise is well controlled in dark environments up to ISO 6400, although Better not to venture beyond that.

But there is a slight disappointment. While 4K video is generally good for filming, it is cropped making it very difficult to shoot anything wide-angle.

Full HD shooting solves this problem, but if you are going to use it, then there is no need to choose a newer camera. Likewise, another issue here is that Dual Pixel CMOS AF only works in Full HD, not 4K.

In a world seemingly obsessed with mirrorless cameras, DSLRs still find it difficult to feel relevant. Many of the technologies included in them are old-fashioned in nature. However, DSLRs are still seen by many as a step up from a smartphone or a soap dish, mainly due to their handling and simplicity.

But for now, there are advantages to using DSLRs. When you buy an entry-level DSLR, you get more for your money. There are other goodies as well, such as long battery life and a huge selection of lenses and accessories for when you want to expand your system. And you can choose with a different budget.

The 250D does NOT represent a huge upgrade from the 200D camera. Yes, 4K came along, but with limitations like cropping and lack of Dual Pixel CMOS AF. For this reason, if you are NOT particularly committed to the idea of ​​4K video, you can save some money and upgrade to an older model.

Overall, the 250D. A good camera that is well suited for beginners or anyone looking to get serious about photography. A good assortment of buttons and dials, as well as a fully articulated screen, make it easy to use, with few drawbacks. especially for the price.